An Intellectual History of Cannibalism

An Intellectual History of Cannibalism, a book by the Romanian researcher Cătălin Avramescu has been recently translated into English. 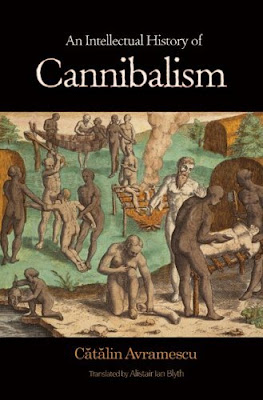 Quoted from Open Democracy:
Catalin Avramescu examines the place of cannibalism in European intellectual discourse. The practice as understood today cannot be divorced from a deep substrata of history and myth extending back to the first Crusades. Avramescu's tracing of the cannibal in European philosophical treatises from antiquity to the Enlightenment (but focusing more heavily on the latter period) shows how the character of the cannibal was used to elucidate disputes about everything from vegetarianism (if we allow ourselves to eat animals, then why not men?) to private property and political organization. The cannibal is a character in philosophical hypotheticals: his actual existence is not a subject of investigation. Avramescu seeks to show how, for centuries, the cannibal patrolled the line between the civilized and the uncivilized, serving as "an image of the subversion of the moral order."

The whole article here: Europe and its Cannibals 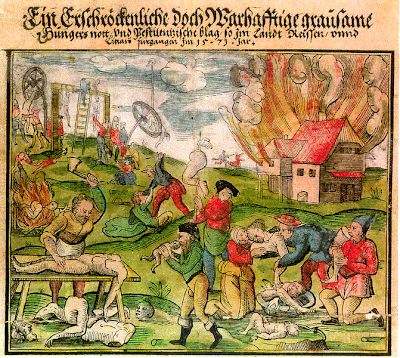 An interview with Cătălin Avramescu in Cabinet Magazine is worth a while as well.


Here's an excerpt:
Early modern authors were aware of the slipperiness of the concept of cannibalism and they played it to great effect. The consuming of the body of Christ in the ritual of the Christian communion or the medical use of the extract of mummies were, for instance, reconstructed as acts of cannibalism by radical writers and reformers. Some utilized symbolic associations such as that between bloodletting and money lending. On the other hand, there was, indeed, some acceptance of what I should call, perhaps, “minor cannibalism.” For instance: a man drowns in a river, is eaten by fish, and then another man eats the fish. What made the difference? Two elements. One is essential in casuistry: intention. The minor cannibals, such as the sick men flocking around the scaffold, do not themselves wish to harm the source of the matter they ingest. This contrasts with the perverted will of the “major” cannibal. The other element is the drama of dismemberment, which is a procedure that carries numerous associations in Western culture.

One thing that is very striking in early authors such as Hans Staden—whose book featured perhaps the most famous sixteenth-century woodcuts of cannibalistic feasts—is the easy elision of a cluster of things that Europeans consider uncivilized in the extreme, usually cannibalism, communal property, and incest. Why do they see these as a sort of package?


For two reasons. First is the influence of classical sources. To some extent, modern travel literature follows the conventions of the authors of classical antiquity such as, for instance, Herodotus, who describes the androphagoi as savages, nomads, cannibals, and as acknowledging no law. The second reason is theoretical. Natural man is, by definition, outside the bounds of the state. This means that whenever philosophers have imagined such a being, they arrived at this concept by eliminating the features that defined the experience of the citizen: property, law, domestic order.
Posted by foodfirstblog at 4:04 PM No comments: 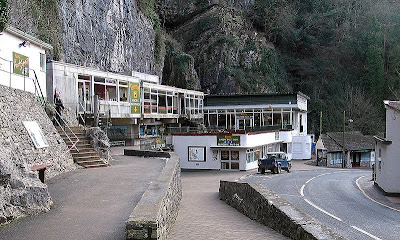 
Cannibal Cottage is more than just a gruesome horror tour. When the exhibit first opened, it was controversial, particularly for its collection of slaughtered human bones. These remains are nearly thirteen thousand years old and prove that the first humans were cannibals. The museum attempts to contextualize these findings by detailing the history of cannibalism, how and why it might have been necessary, and the evolution of Homo sapiens.

More at Atlas Obscura
Posted by foodfirstblog at 8:38 PM No comments:

The Strong Always Eat the Weak

Posted by foodfirstblog at 11:02 AM No comments:

The so called Cannibal Restaurant is most probably just a hoax. However its prominent campaign has triggered outrage and disgust.

In a prominent advertising campaign on the internet, in German newspapers and on television, the restaurant, Flime, is appealing for willing donors and diners to become members of what it hints at being a new dining movement.

"Members declare themselves willing to donate any part of their body," the advertisement reads, adding that any resulting hospital costs will be taken on by the restaurant. They say they are also looking to employ an "open-minded surgeon".

The location of the restaurant – if it exists – is being kept a secret, as is the identity of the owners and investors behind it. As a foretaste of its menu, Flime is suggesting traditional Brazilian dishes such as bolinho, which it describes as "fried tatar balls with a sweet-sour dip", or feijoada, a main course consisting of "various pieces of meat with black beans and rice". It does not specify what type of meat is used.

The restaurant's menu is mostly modern Brazilian cuisine with some additions. The Amazon Wari' tribe is cited as an inspiration. The tribe used to practice mortuary cannibalism.
Posted by foodfirstblog at 12:35 AM No comments:

This has nothing to do with central Europe. I blog about this weird story just because of its resemblance to another one: here 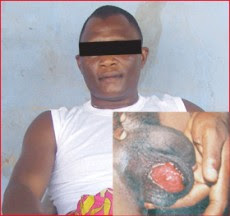 A well-known organiser of the ruling National Democratic Congress (NDC) at Somanya in the Eastern region, Kwame Wayo Acheampong, has found himself in the grips of the law after pouncing on his tenant and chewing part of his scrotum in a fierce fight last Thursday.

Baring his teeth like a vampire hungry for blood, Kwame Wayo, 45, went straight for the genitals of 37-year-old Sani Sulley, a tenant in his house, and took a ginormous bite at this important “property”, tearing half of it and leaving his victim in a pool of blood.

The wife of Sulley was so mad about the attack she told DAILY GUIDE she was very determined to see to it that Kwame Acheampong was punished for what she described as ‘cannibalistic behaviour’.

more here
Posted by foodfirstblog at 2:20 AM No comments:

In my previous post I blogged about evidence of mass cannibalism in central Europe (southern Germany to be more precise). Now though scientists point out to other possible explanations of the butchered bones found in Herxheim.


(inhabitants of modern Herxheim are probably NOT cannibals:) 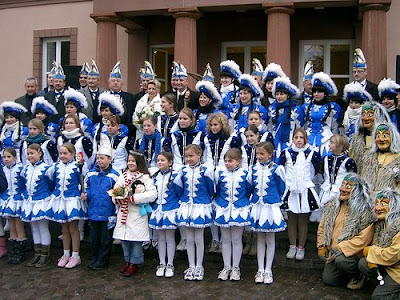 Two archaeologists who have studied human bones unearthed a decade ago at Herxheim reject the new cannibalism hypothesis. In a joint statement to Science News, Jörg Orschiedt of the University of Leipzig in Germany and Miriam Haidle of Senckenberg Research Institute and Natural History Museum in Frankfurt say that Boulestin’s evidence better fits a scenario in which the dead were reburied at Herxheim following dismemberment and removal of flesh from bones. Evidence of ceremonial reburial practices has been reported for many ancient societies.

If further work confirms large-scale cannibalism at Herxheim, “this would be very surprising indeed, simply in terms of the scale involved,” remarks archaeologist Rick Schulting of the University of Oxford in England.

More about the controversy: here

Posted by foodfirstblog at 9:59 PM No comments:

Archaeologists have found evidence of mass cannibalism at a 7,000-year-old human burial site in south-west Germany, the journal Antiquity reports.

The authors say their findings provide rare evidence of cannibalism in Europe's early Neolithic period.
Up to 500 human remains unearthed near the village of Herxheim may have been cannibalised. 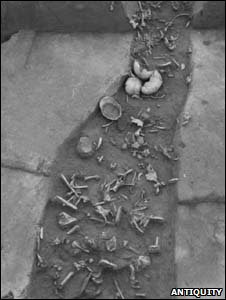 Via BBC News
Posted by foodfirstblog at 1:52 AM No comments: 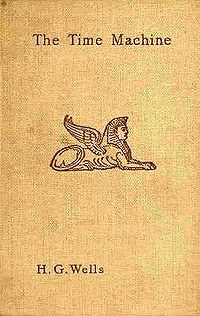 Humanity in the year A.D. 802,701 is divided into the Eloi, a society of elegant, androgynous, and rather childishly naive people and the Morlocks - troglodytes, who breed and eat the Eloi.


Here is a fragment of the 1960 movie directed by George Pal:

Posted by foodfirstblog at 1:27 AM No comments:

Hufu is the name of a soy-based product designed to resemble human flesh (in taste and texture): "Healthy Human Flesh Alternative". 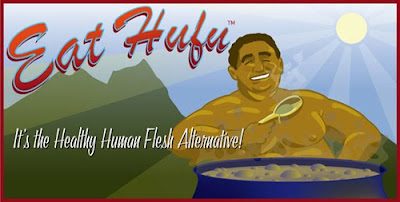 According to the producer's website, human flesh has the "taste and texture of beef, except a little sweeter in taste and a little softer in texture. Contrary to popular belief, people do not taste like pork or chicken". 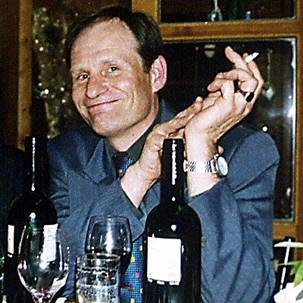 Armin Meiwes (and we can trust this guy in that matter) says human flesh has a taste of pork. By the way, Armin Meiwes has turned vegetarian: "He finds the idea of factory farming as distasteful as his crime was". (source)

From a documentary The Man who ate his Lover (2004), we learn about Meiwes' literary taste as well:

"Brandes starts to bleed to death in the bath; Meiwes passes the time downstairs by reading a Star Trek novel".


You can watch the full documentary here:

Posted by foodfirstblog at 11:16 PM No comments:

I mentioned this American band before, but described it as extreme metal.


Which in visual terms means more or less this: 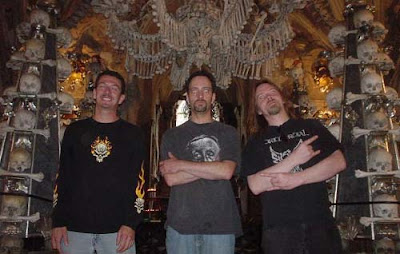 On their latest album, there's a song about Armin Meiwes:

In the German internet classifieds

was an ad for a man's demise

then after death he'd eat his prize

a cannibal in modern times

Then to his ad a man replied

agreed to what was advertised

his penis was cut off while still alive

he ate half his own penis before he died

Posted by foodfirstblog at 1:06 AM No comments: