A comic entitled "Kiełbasy Harmanna" (Harmann's Sausages) by Sara Sapkowska & Bartek Biedrzycki has just been published in Kolektyw#4 magazine. The story has little to do with real Fritz Haarmann (except the name of the character and the city of Hannover). In general, it was based on a song by Polish rock band T-Love (take a look at my previous post). It seems a little odd, as the factual story of Haarmann was way more surprising and interesting, than what the song describes (according to the latter, Haarmann was a butcher, who used to make sausages out of people). 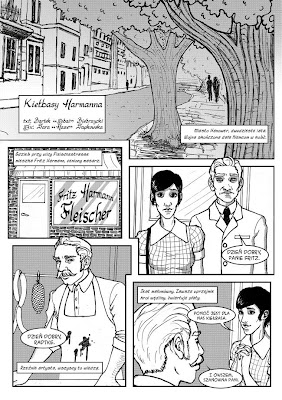 I made a very brief interview with writer Bartek Biedrzycki

Foodfirstblog: what was the source of inspiration for your comic? I presume, the song by T-Love, but anything else?

B.B.: In fact, this was the result of my readings about the Weimar Republic and its fall. When working on the comic, I was freshly after "The Black Obelisk" by Erich Maria Remarque. This is where my interest in that particular legend and these times came from. The dialogues and constant references to bankruptcies and suicides were inspired by the book.

Foodfirstblog: When did you get the idea for the story?

B.B.: During works on Kolektyw #3, which was about urban legends. The comic was ready by then, but somehow it wasn't included in the magazine.

Foodfirstblog: How did you work on the script? Did you research the archives, old newspapers or other sources?

B.B.: As far as I remember, we have seen just a picture of the street, that we used as a model. Otherwise we didn't do any research. I only checked some facts about the "Butcher of Hannover", who has little to do with the character from the song by Staszczyk [T-Love's leader].

Foodfirstblog: Were you interested in the real Fritz Haarmann?

B.B.: Yes and no. I was intrigued by him in the context of my minimal interest in serial killers, like for instance the "Vampire of Rostov". But this interest is really negligible, a spin-off of my research concerning interesting historical figures.

Foodfirstblog: Did you research on other similar stories from the 1920's?

Foodfirstblog: Do you know other works (comics, movies etc) about Haarmann or similar stories?

Posted by foodfirstblog at 3:45 PM